Due to the complex nature of die-struck lapel pin...

Enamel pin designers, take note. Many of you are leaving...

Electroplating is a  complex process is used extensively in...

How To Make Enamel Pins

There has never been more choices for the back of your pin....

How To Design Enamel Pins, Step By Step Guide

Our step by step guide walks you through the process to...

It's more important than ever to stay connected to your...

Our enamel pin template offers tips and tricks for...

Whenever you buy pins or medals you'll have to select the...

What Is The Difference Between Hard And Soft Enamel Pins?

The main difference between these two lapel pin types is...

The most sought after sport trading pin by any trader at...

One of the top searches that helps people find our site is...

DIY Enamel Pin Design: What Size Do I Make My Enamel Pin?

The amount of text and detail on a pin usually decides the...

The Silly Season: Deadlines You Need To Know About

In our business, TIMING is everything. Please review two...

After nearly 5 decades in the custom enamel pin business,...

A lot of enamel pin designers are leaving the most...

Custom Race Medals And Runs For The Cure Medals.

Take a moment to learn about our experience in creating and...

The beautiful thing about custom medals is that you can...

What Size Should I Make My Medals?

How do you create medals that look and feel like the...

There are two ways to attach your ribbon to the medal. With...

Our company offers three different ways to attach your...

We feel the ribbon is almost as important as the medal....

Lanyards are one of the most versatile promotional products...

What Are My Choices for Custom Printed Lanyard Attachments?

When ordering custom printed lanyards, the lanyard is only...

Recent Order By The Flash TV Show In Vancouver     Trade...

When purchasing custom sport medals, there are a zillion...

What Are The Different Types Of Custom Lapel Pins?

The first you need to make when purchasing custom enamel...

What is the difference between 2D and 3D Engraving?

Adding curved or three dimensional elements to your medal...

7 Things To Look For When Selecting Enamel Pin Manufacturers

Silk screen enamel pins  help you overcome the most common...

This video is for artists who want to create enamel pins...

DIY Enamel Pin Design: Before & After

In this enamel pin tutorial screencast, we dive into the...

Our cheat sheet offers tips and tricks. Be sure to dig into...

Direct from the desk of our design team, this illustrator...

How Do I Specify Colours On Enamel Pin Designs? [Colour Matching...

We haven't come up with a way to see the colours inside...

This is the video that started it all! Three years ago we...

To say that the enamel pin trend has had an impact on our...

It's more important than ever to stay connected to your...

It’s important to mark milestones in any organization....

Do you want unique looking enamel pins? One of the most...

Metal pins without paint offer a whole host of creative...

Color matching is one of the more challenging concepts that...

Another topic that baffles our customers is the...

What Is Vector Art?

Vector art is the preferred graphics file format in the...

The hottest trend in Enamel Pin design is definitely...

Robbie Thompson is a man of mettle. At 21, he has had far more than his share of obstacles in life, and they just keep coming. Yet he faces them down with an inner strength that leaves we ordinary mortals slack-jawed in awe.

Most recently, his mental strength helped him power through painful leg cramps while cycle racing at the World Transplant Games in Newcastle, England, Aug. 17-23.

At 21, he has had far more than his share of obstacles in life, and they just keep coming. Yet he faces them down with an inner strength that leaves we ordinary mortals slack-jawed in awe.

Most recently, his mental strength helped him power through painful leg cramps while cycle racing at the World Transplant Games in Newcastle, England, Aug. 17-23.

The cramping, a symptom of his degenerative muscle disease, began almost as soon he started the 10-kilometre competition and lasted all the way to the finish line. Refusing to quit is just the way Robbie rolls.

He didn’t win that race, but Robbie was extremely proud of his accomplishment, vigorously waving the Canadian flag and giving out dozens of enamel Canada-flag pins (supplied by sponsor Ultimate Promotions) to new friends -- fellow transplant-recipient competitors, support people and organizers at the Games. 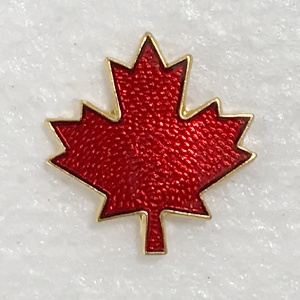 “Those pins are out all around the world now,” he says. “Everyone I showed them to, absolutely loved them. Whenever they look at those pins, they’ll think of those great times we had together.” 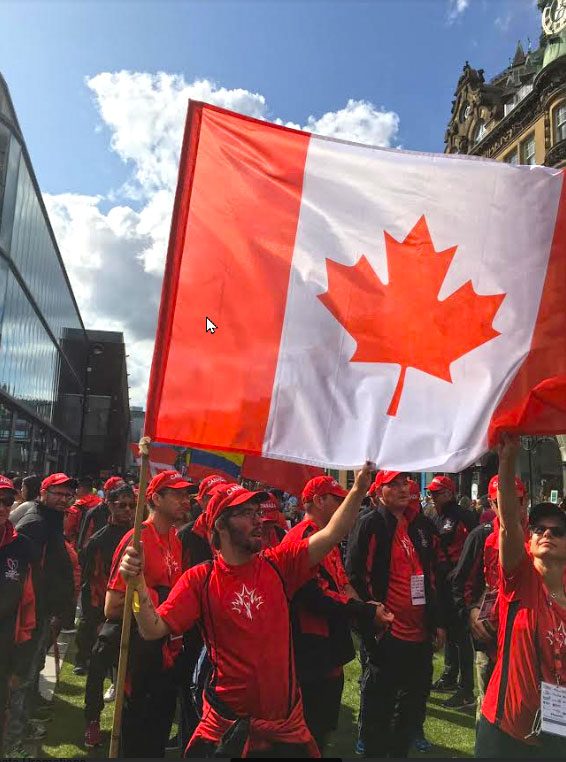 The challenges started for Robbie when he was very young.  At five months of age, specialists discovered the reason behind his mysterious development problems: the left side of his heart was expanding rapidly. There was no cure for the rare disorder -- only a transplant could save his life.

But a child-sized donor heart was not easily available and his rare blood type made the search even more difficult. His health slipped steadily as the waiting dragged on and on.

He reached 18 months, but still no heart. Soon, life support systems were barely keeping him alive and his family was warned he had only three days to live.  Finally, the right heart arrived and surgeons transplanted it into his toddler-sized chest.

The relief for his family was immense, but short-lived. His coronary artery soon showed its unhappiness by increasingly restricting blood flow, a symptom his body was  rejecting the new heart. Anti-rejection medications were not able to help enough. As Robbie’s mom says, “It was a ticking time bomb.”

Once again, Robbie was spending a lot of time on life support. At the time, organ donor rates were quite low, compounding his age and blood-type restrictions, he says.

Finally, when he was five years old, a donor heart became available and a second transplant operation saved his life, again.

This time, the results went better, the medication regime successfully fending off rejection. But a medication-suppressed immune system means a transplant recipient faces dangers at every turn. While minor infections are tossed off easily by a normally healthy person, even a minor infection can turn serious -- even deadly --  for a recipient. Ordinary-life things like sushi and salad bars must be avoided by some, because of the risk posed by the bacteria they can harbour. For Robbie, it’s flying that makes him sick. Predictably, just getting to the UK for the games made him.

That infection then kept Robbie from competing in the freestyle swimming, the event for which he had put in countless hours of training.  Taking the chance to swim would have been not only foolish for him, but a danger to the other swimming competitors, also vulnerable because of immuno-suppressant medications.

Like all recipients, Robbie has a lifelong relationship with medication, hospitals and the surgical team. “It’s just part of life for us (recipients),” says Robbie.

“Without the drugs to suppress my immune system, my body rejects my heart. And that’s not good,” he adds, his understatement showing the wry humour he uses to cope, but also underscoring the daily risk of his condition.

But he’s not about to let any of that keep him down.

“Ever since the second transplant, I’ve been pretty strong,” he says. 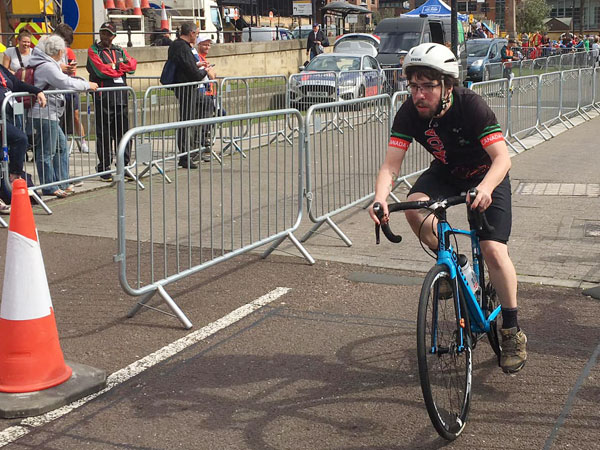 As a maturing boy, Robbie began recognizing that, after being legally dead, on life support, his continued relatively normal life is truly a gift, and that he is alive only because two other young lives were lost.  He began seizing that gift, feeling compelled to make the most of life’s opporunities.

He began learning how to play sing and music and he started getting involved in transplant-athlete sports. Then, as an 11-year-old, he got the opportunity to go to the 2009 World Transplant Games in Australia.

Following that, he continued to improve, competing regionally and nationally, winning two cycling gold medals and a swimming gold at the Canadian National Transplant Games in Vancouver last year.

He says the Canadian Games are really a lot of fun, but the World Games are significantly more competitive.  That’s because multiple other countries insist their transplant athletes must qualify via national wins to go to the Worlds.

Even so, the World Transplant Games are more about comradeship, fellowship, and self-identifying as unique and capable individuals, than they are about winning, he says.

“It’s very celebratory,” he says. “It’s more about the coming together of a bunch of people, from around the world, whose lives have been saved by somebody donating an organ.  We’re alive, because someone else could not be alive.” 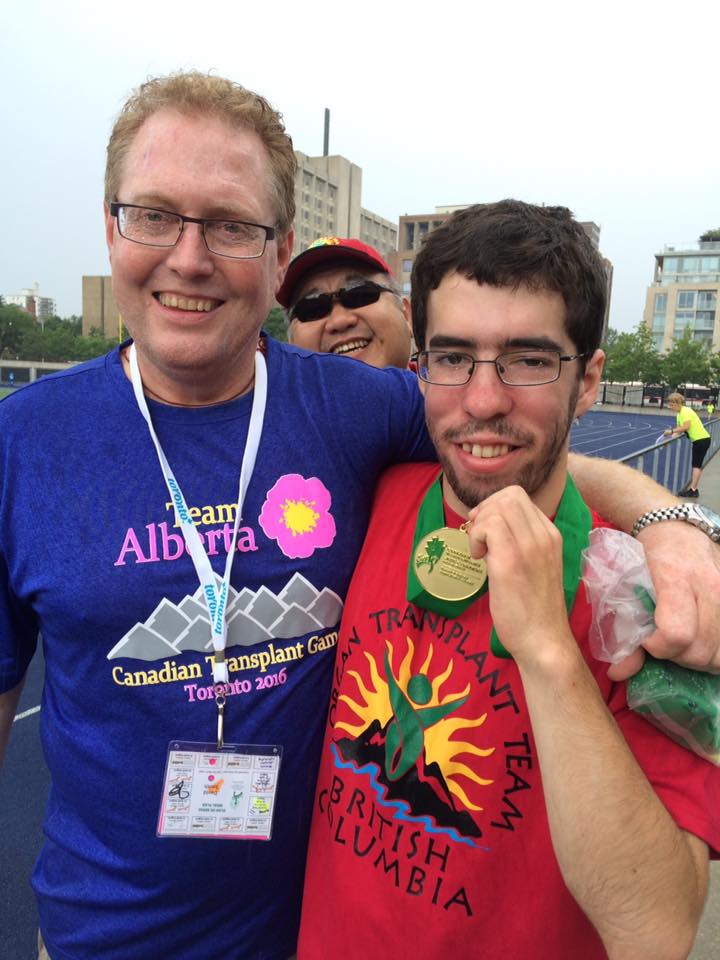 The bond among the Transplant Games athletes “can be quite surreal,” he says.  Among people who carry carry an organ of a deceased person, there is very often “another level of understanding, a thought process, a mutual understanding” that non-recipients can’t grasp or relate to, he says.

For Ultimate Promotions owner Craig Davidiuk, it was an honour to sponsor Robbie with the enamel pins and toward costs.

“He’s shown so much courage, passion and dedication to organ donor awareness. “We’re very proud to have him as an ambassador for Canada at these games and others.”

Craig Davidiuk has been in the promotional products his entire life. His family owned and operated a pin factory until 2002 and he eventually took over the company in 2012. He also has a diploma in Media Resources from Capilano University. Today his company is one of the leading suppliers of custom pins, medals and swag in Western Canada.

He is a father of one son with his wife, Courtney. Craig enjoys skiing, mountain biking, DJing, playing saxophone and world travel.  The Davidiuk family resides in 100 Mile House, BC. 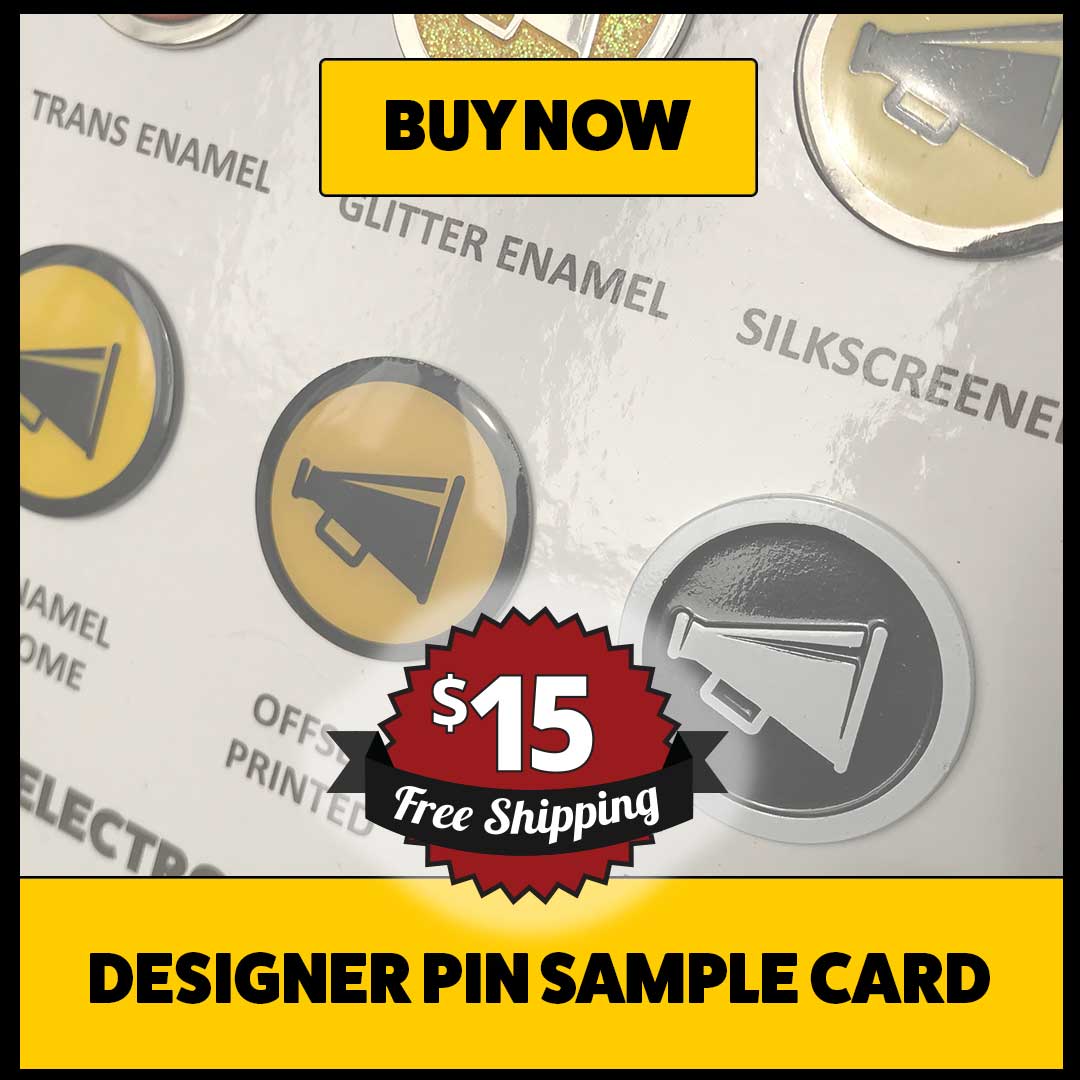 We like to provide great site with complete features what you want to impletement in your business!

Fresh from our blog